I love this show! The setting, the characters, interactions and that music. I love the music here so much! but now to put all of it into words for you. Let me know if you watch the series!

It's a romance anime, the first anime I actually paid attention to was romance so it's like the main kind I watch and look for. Although slice-of-life tends to be a close second. This show has no fan-service or anything like that. It's a very chill and calm experience compared to some others I've seen.

Yuichi is living with his aunt Akiko and his cousin, Nayuki. He's staying somewhere he hasn't been in over seven years and is trying to remember events and people he knew from back then.

People he once knew being reintroduced and getting a few episodes of dedication as he remembers times with them.

The story takes place in Osaka, Japan. The game says the story starts in January 1999

Everywhere is covered in snow for most of the anime. Besides flashbacks to seven years prior and near the end of the show as it moves into spring.

A few locations are revisited; Their school, the shopping district, a park, a few stores and resturants, Akiko's house. The heavy focus on these locations makes it feel like a small, secluded place. Easy to get used to, and you get to do this with Yuichi as he figures things out.

The songs are almost directly taken from the source material. A visual novel, you can almost tell when it was made by the instruments alone.

The title Kanon is a reference to "Canon" a term used in music when a melody is played and copied throughout. The episode titles are referencing music.

My favorite tracks are:

The songs while showing their age still get stuck with me. One song that doesn't have this problem is a music box version of "Last Regrets". I'd rank the music box song third-best of the shows OST. It's titled "Yume no Ato" however, it is probably the most memorable piece of music in the soundtrack.

There are a few others with the music box sound to it but that's my favorite one.

Some of the other songs aren't the best but they work for the shows atmosphere better than my favorites. They capture the shows feeling.

The music also being dated now I think adds a degree to the story, about trying to remember something from years ago. I'm sure this wasn't the original intention but when I first watched it I got that feeling.

(Hover a character to see their name!)
(Vague points & thoughts as to not spoil)

Ayu - The first of many Yuichi meets, she's short for her age and is searching for something important to herself.

Nayuki - Yuichi's cousin. A heavy sleeper who's always waking up late and rushing to arrive just in time.

Makoto - Initally mad at Yuichi; She doesn't remember why. She likes to mess with him.

Shiori - She's got my favorite character design. She isn't allowed to go to school; Although commonly drifts around outside.

Mai - An outcast at school, taking the blame for many things she can't control. Very quiet and very little friends. 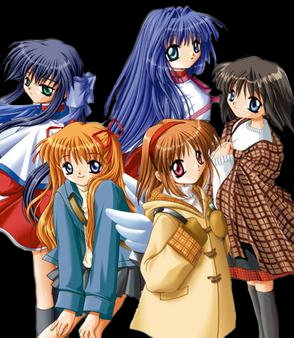 I've watched the works of Key in a chaotic fashion.
Angel Beats couldn't keep me inticed, Clannad was a blur; This one really resonated with me.

I've even watched "The Day I Became a God" but I grew disinterested as time went on with that as well.

This one I think is the best, I have yet to track down "AIR". If you do end up watching these I warn you they tend to get really sad to move the plot foreward.

It's no "Your Lie in April" in terms of the levels of sad they reach. I did see "Your Lie" before this by a couple years but still like this a lot. It doesn't leave me in shambles.

After Clannad I took a break from anime. Yet this left me sad but wanting more.

I found Kanon on a whim; Isn't that something?

Please, feel free to reach out about this show if you see me around!

I know the art style they use for the faces has been destroyed, that too a product of when it was created. I find it weirdly enduring that they continued the look for as long as they did.

I did end up watching Charolate and it was pretty good, I like the concept behind it but the shows powers weren't enough for me to like it in the end.